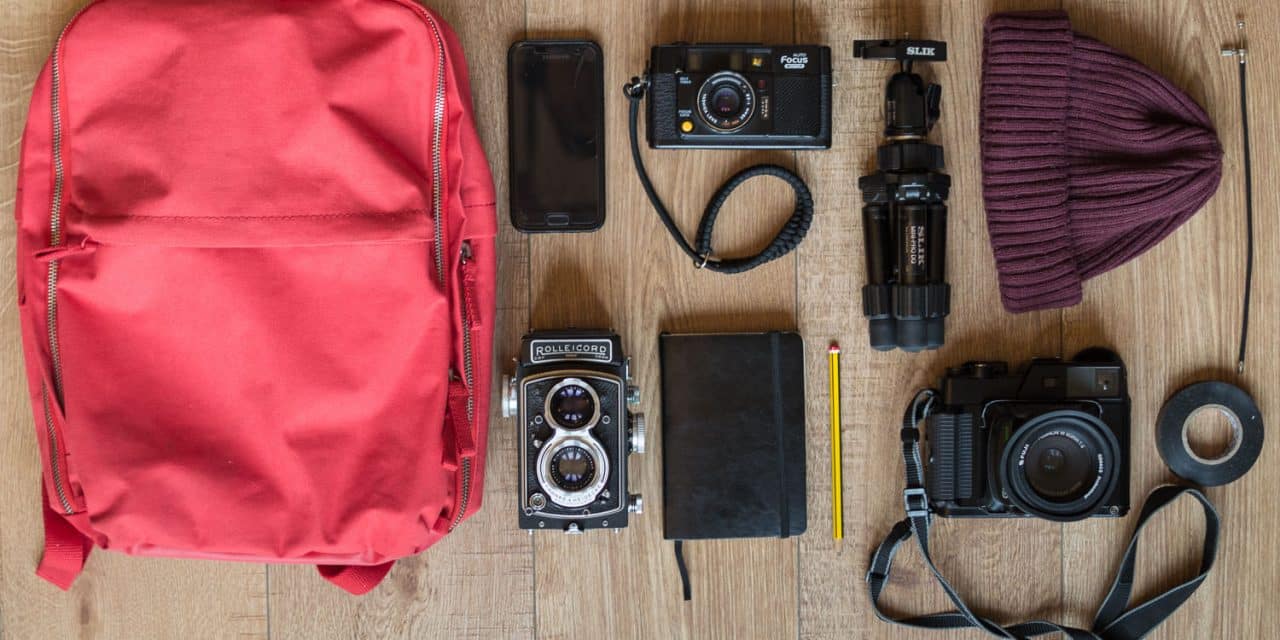 Michael cycles around and traverses nature with these underrated analog oldies in tow. I started shooting film a couple of years back and haven’t had the inclination to pick up a digital camera since. That isn’t to say that I think film is better than digital per se – that would depend on how you want to measure ‘better’ – but I’m personally finding film to be much more enjoyable.

As such, my bag is now 100% film. Included is the Rolleicord Va Type 1, a relatively inexpensive TLR which also has to be the most fun I’ve ever had shooting film to date. Beautifully made, the viewfinder is a joy to look through and makes everything look alluring and like it should be photographed immediately, a spell which is only broken once you get the negatives back from the lab (only to be played out all over again with the next roll). I lost the soft release pusher button for this whilst rushing to make some long exposures on some sand dunes before the light went one evening – it’s pretty non-essential so not a big deal and replacements, when available, cost upwards of an eye-watering £40. But like I say it’s not a big deal, I just liked having it complete. Which is why I went back weeks later to look for it in the sand, muttering curses under my breath. But like I said, not a big deal.

The Fuji GS645S is a camera I’ve slowly grown to love, having despised it initially. It came to me with a dead light meter, a crack in the casing, a torn hood and a light leak (hence the inclusion of a roll of electrical tape). Mine sounds like a bad clockwork toy when you wind it on and you only get 15 frames per roll in 6×4.5 format. Furthermore, it’s hard(er than some) to load, the default orientation is portrait and the rangefinder focus is slow and faint (remedied somewhat with what I’ll call the ‘Rick Oleson dot’, applied with a Sharpie – thanks Rick). Despite all of this, the more I shoot it, the more I like it. The lens is so sharp and I’ve grown to love the portrait orientation along with its 80s aesthetic. You might be able to spot the gaffa tape on the front which is in place to reinforce a notorious weak point on these cameras. I lost the viewfinder eyepiece on a mountain once, but didn’t go back to look for the lost part this time because I didn’t fancy the climb. Instead, I managed to replace it with a Nikon F diopter which I think is an improvement. I also replaced the stock hood with a metal one, which I decided wasn’t an improvement so went back to using the rubber one from Fuji.

The Yashica Auto Focus Motor was a bargain find in a charity shop. It works perfectly and is a great auto-everything way of capturing things quickly in 35mm. Again, it’s an 80s camera but the autofocus and the metering have always been spot on in my experience. This one came before Yashica compacts got T* lenses but I think it stands up just fine. It’s also the only one in the bag that requires batteries to operate, but they’re 2x AAs which are wonderfully ubiquitous. The strap is a Cordweaver wrist strap that I fitted in a desperate and ill-thought-out attempt to make it look more street. Still, it’s a good strap.

The Slik Mini Pro tripod is delightfully compact. I often cycle out to prospective shooting locations, as well as to and from work, and it’s great to have something that’ll fit in the bag just in case I want to try something with it.

I use an app on my phone as an external light meter; perhaps the purists would scoff at this but I’ve found it to be pretty reliable. One day I might try and get a Sekonic L-389A to continue the ‘sans battery’ theme, but for now I can’t fault an app that will do both reflected and incident readings and cost less than £3.

The old, short cable release has a screw-in lock rather than rotating collar. I’ve always found these much better than the locking collar design, especially when it’s dark and your hands are cold.

I always include a hat as a makeshift camera protector whilst everything’s in transit. Super pro.

A notepad and pencil. I’ve been trying to take notes (shutter speed, aperture, conditions, location etc.) when I shoot to try and learn and improve, especially for longer exposures or low light situations.

You’ll have noticed that there’s no film pictured, but I’m currently working through the Portras and I also have a roll of Streetpan that I’m looking forward to putting through the Rolleicord.

The bag itself is a cheap little number from Ikea, and it’s just fine. It’s compact and has just enough padding and compartments to keep everything relatively safe (aided by the aforementioned hat of course). Its diminutive size is also a great prophylactic against any temptation to overpack.

Images from all of these cameras can be found on my Instagram: @michaelraven_

Thanks for sending us your bag shot Michael. Thanks for filling everyone in on the dot trick as well!