Jesse’s book review, Ariphoto Selection by Shinya Arimoto
Jesse is back after a short break and he brings us a brilliant review of the work of Shinya Arimoto. I love Arimoto sans work and I am happy to see this latest piece on the site. Check it out.

I ran into Arimoto twice since the release of Airphoto Selection vol. 4. Once at the Josef Koudelka Retrospective opening in Tokyo and then in Shinjuku when I was on the way to his gallery for a portfolio review, one of which he said he wouldn’t attend because he wanted to go shooting (got to respect that). However, it was that second meeting that I was finally able to get Airphoto Selection vol. 4. Just like the previous three, there are 500 copies for 1000 yen each consisting of black and white photos shot in medium square with a Hasselblad. In that this is a series, one of the joys of vol.4 is in the continuing motifs. Like a favorite television series going into its fourth season one joys in the delight of settling into a direction and understanding its characters while looking for subtle variances since one now has a basis for comparison and posses a better idea of the creator’s intent. Shinjuku is the setting as with vol. 1 and 2 often even utilizing the same locations, there is a continuing focus on homeless and other social outcasts, and there is that curious attention to shoddy robotic structures that we see in vol.1 with a giant teddy bear and in vol. 2 with the robot café woman that makes an appearance here as well. Not to mention this play with construction sites as seen here and in vol. 2. Yet there are the variances… The first photo is of an older gentleman in a suit accessorized by gaudy jewelry in a telephone booth. Captured unknowingly, his glance is off in the distance coming off a bit suspicious. This is in essence already makes it an interesting photo, but looking closer you can see his right hand in the coin return. Because of the suspicious glance and unawares as too Arimoto’s presence one can suspect he is looking for change (as oppose to receiving his change after a call) which makes the photo more interesting because of his tasteless flamboyant appearance yet is reduced to looking for change in a coin return. There is another photo that captures a woman (?) flashing her breast. Arimoto’s penchant for being the right place is displayed here as you can really see he captured this spontaneously since the focus is a bit off and the fact that people passing by in the shot are unaware. What also drew my attention was the extraneous arm on the right simply because most would have tried to exclude it, yet it is exists and shows the medium’s nature of frame selection while telling us of more. Also what this arm does is work on this play on limbs that can be seen in the adjacent photo with the woman conjoining her limbs while holding a boot and the crossing of limbs in the photo below. This was the lead photo for Arimoto’s exhibition that year, capturing protesters. I talked with him about this one and he expressed how surprised he was in the dark room when that light streak showed up on the negative. The white line draws vertically across the frame setting in motion an intricate play of lines of both the protester’s and cop’s limbs that also increases the tension already present in the photo. Once again there is an extraneous hand in the foreground that achieves the same effect as the previous photo. Continuing this theme, there is a photo of a man with his upper torso down in a sewer drain leaving us only with his limbs in view. The story we can draw is that the man is possibly homeless judging from the desperate action of actually lifting a sewer cover because he saw something of value down in there in addition to his attire. You notice how each of these photos on their premise are great photos but they take on more with the stories they all contain. Guess the question is how long will the series continue for. I have begun to notice the slights when Arimoto’s name comes up in conversations, “oh the guy that shoots homeless in Shinjuku” and such. Vol. 3 offers the variation with the Tibet photos that was as necessary as season 2 of The Wire in taking a departure covering a new cast at the docks. Both served to show range, while avoiding lazy stigmas that could be applied. However it may be, his work definitely sets itself apart.

For a point of reference also check my previous review on the first three here. The book comes in an awkward size that doesn’t quite fit conventional book shelves, but the printing and quality are top notch for the price. Buy two and cut the photos out of one and frame some.

I want to thank Jesse for this review. It is great to see some of these images, as I know Arimoto san and I respect him a great deal. It is also interesting, as I was literally standing right next to him when he took the protesters shot. That was a wild day. 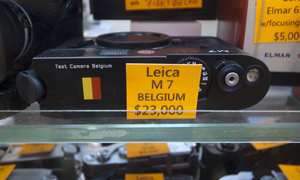