In the last decade, digital photography has taken over, converting many former film shooters to trade in their analogue gear for the convenience of digital (no more fiddly film loading, scratches on their negs, waiting for prints to come back). What this has meant is that there’s an awful lot of second-hand film cameras on the market.

The high-end stuff – Leicas, Alpas, Hasselblads and Contaxs – may still go for a pretty penny, but elsewhere there are some serious bargains to be had.

I’ve been shooting on second-hand cameras since 2000, after I ditched my auto-focus Canon to learn the very basics of photography on an old Praktica – it cost me £50 (probably far too much for an East German SLR built in the hundreds of thousands) and worked like a charm. It gave me a taste for hunting out and using old cameras, which continues to this day.

If anything, old film cameras have become even cheaper. I’ve paid more for rolls of film than I have the cameras to load them into, and got some fantastic results. The following are five film cameras you should be able to find for as little as £10 and no more than £50. You might pay more if you buy them from a camera shop with a full guarantee, but that’s the price you pay for proper peace of mind.

The Zenit E, the cheapest way to get into SLR photography (Pic: Wikimedia Commons)

The Zenit E must be the most produced SLR in photography history. This Soviet –era staple must have single-handedly introduced more people into photography than any other camera since the Kodak Brownie. First produced in 1968, the Zenit E used the Pentax/Praktica screw mount, marrying it to a body with an uncoupled selenium meter. It’s a solid camera with few bells and whistles – a handful of speeds up to 1/500, a self-timer and little else.

The Zenit’s strengths are that if you find one that’s in working order – Soviet quality control, especially in the 1970s and early 80s wasn’t exactly robust – then its likely to soldier on for quite some years. I picked up mine at a market in Greenwich, south London, over a decade ago. It cost me £4. The Zenit has a crack on the meter window and the old Helios lens it came with had seen better days. But that Pentax screw mount opens up a world of literally thousands of lenses made all over the world. These include the superb Pentax Takumar lenses.

My £4 Zenit has been taken on trips to the Amalfi Coast and Istanbul, and soldiered on with barely a hiccup – even its selenium meter works perfectly Zenit Es were exported in their hundreds of thousands across Europe to raise hard currency for the USSR; it won’t be hard to find one in working order.

The Trip’s name says it all – this was a camera designed to be thrown in the carry-on bag for those two weeks of sun and sand in Greece and Spain. First released in 1967, Olympus’s Trip is a very simple camera. A point and shoot ‘powered’ by a huge selenium cell built around its 40/2.8 lens, the Trip has an Auto control that chooses between only two possible shutter speeds – 1/40 and /200, both of them fast enough to ensure no camera shake. Its ISO of between 25 and 400 is fairly standard for the age – when the Trip came out, films faster than 400 were rare and expensive. Photographers using them were unlikely to be relying on the Trip, even though this camera has a lens that’s rightly respected.

In the UK, the Trip used to be advertised by no less a figure than Swinging Sixtiies legend David Bailey. Along with the Pen half-frame camera, the Trip helped create Olympus’s justified reputation for making fantastic lenses. Its four-element Tessar design is no slouch even today – a quick look through Flickr will show you some of the fantastic images a Trip is capable of, especially with more recent films. And thanks to that selenium cell, the Trip didn’t need any batteries. Olympus’s canny thinking created a camera that was ubiquitous during the 1970s, and still has a sizeable cult today. More than 10 million Trip 35s were made until production ceased in 1984.

The Trip I bought in 2010 cost me a little over £20 from a camera fair. It’s a solid, heavy camera for a size but has a reassuring heft; Trip 35s have an enviable reputation for mechanical reliability. And though I haven’t used it as much as I should, there’s no denying the Trip’s sharpness. There’s a reason why the cult around this remarkable camera continues.

The Soviets weren’t the only ones to churn out cheap SLRS in the days of the Cold War. In East Germany, the giant Pentacon camera works created a long line of manual SLRs, most of them using the M42 mount. Like the USSR’s Zenits, Praktica cropped up all over Western Europe – the subsidised, state-built Prakticas were a lot cheaper than the West German or Japanese cameras.

By the early 1980s, the Praktica line was well-established, and while the M42 mount was considered out of date, Praktica continued to develop models using it. The MTL range – the MTL 3, MTL 5 and MTL 50 – were a cheap way to get into SLR photography. Hundreds of thousands of them stocked camera shop shelves all over Europe.

The Prakticas might not have quite the refinement classics 70s Japanese manual SLRs, but then they cost a lot less. Prakticas are tough, durable and notoriously reliable; their metal shutter was said to be durable enough for 100,000 exposures. The Praktica MTL 50 was the last of the Praktica M42 range, and made from 1984 to the fall of the Berlin Wall in 1989. The MTL 50 is a perfect student camera; centre-weighted metering, LEDs in the viewfinder to guide exposure, ISO up to 1600 (so you can practice pushing film) and shutter speeds up to 1/1000th.

I learned photography on an MTL 5, and picked up an MTL 50 in 2013 for £25. It works perfectly. Prakticas were usually replaced when their owners got the wherewithal to but more sophisticated cameras, but these budget classics are bargains. Worth noting, too, that the Praktica’s shutter button, on the front of the camera, is much more natural than most SLRs. Just be prepared for the loud crunch of the shutter – this is not a camera to use when you’re trying to be inconspicuous.

Medium format film is an undeniable step up; using film four times the size of 35mm, it means much more detail can be captured and photos enlarged to much greater size. The film itself is no more expensive than 35mm, but the cameras were often costly, being aimed more at professionals or enthusiastic amateurs. You’d have to have been very serious about your hobby if you were going to shell out the money for a Hasselblad 500 in the 1970s.

Nowadays, medium format kit can actually be picked up for less money than you’d think. But few present as much of a bargain as the Soviet-built Lubitel 166. Hailing from Leningrad, from the same factories that created the iconic Lomo LC-A, the plastic Lubitel 166, built in the early 1980s, is the latest in a long line of Soviet twin-lens reflex cameras originally copied from Voigtlander’s Brilliant of the 1950s.

An Istanbul candid shot on old Kodak film; the Lubitel is perfect for shooting without being noticed

The Lubitel is often unfairly compared to toy cameras like the Holga or Diana, plastic-lensed novelties blessed (or cursed) with light-leaks, distortion and heavy vignetting. The Lubitel sports a proper glass lens, and is a massive step up from the plastic brigade.

The Lubitel 166 can be had to around £30 – it’s another camera that was built in the hundreds of thousands until production ceased in 1988. The Lubitel requires the same learning curve as any TLR (it takes a bit of practice to learn how to focus with a TLR) and its fastest shutter speed is only 1/250th. That said, it’s a great tool for shooting street photography, especially on a cloudy day or when the light is low.

On the surface, the Olympus 35RC looks no different to a plethora of rangefinder cameras made during the 1970s. In reality, it’s one of the most under-rated 35mm cameras of all time. If you do a little bit of snooping, you should be able to find one for around £50. What that gets you is the perfect street photography camera, a tack sharp lens in a body small enough to stick in your pocket.

Why is the Olympus 35RC so good? For such a small camera it’s packed with features, though not so many that it’s difficult to use. It’s got a similarly sharp and contrasty lens to the earlier Olympus Trip 35 (a 42mm 2.8) , but there the similarities end.

Heavy Trash drummer Sam Baker, shot on the streets of New York on an Olympus 35RC

Olympus 35RC does away with slow speeds under 1/15th too, meaning that you should be able to handhold and get a sharp shot (this being a rangefinder there’s no mirror to slap and cause vibration).

I bought my first Olympus 35RC back in 2010 and was blown away by the quality of the shots I got from it. It’s
fantastically portable and whisper quiet. Mine cost me £40 – and I can’t think of a better £40 I’ve spent on my photography.

Check out more shots from these five cameras below. And if you’ve got any other suggestions for must-buy cheap cameras, do let me know.

A Barcelona busker and fans, shot on a Praktica MTL 50

A beautifully sharp and crisp shot on the Olympus 35RC

A Greenwich Park squirrel, on a Lubitel 166 and Fuji Velvia slide film

Vignetting and flare in Greenwich Park on a Lubitel 166

Zenit E portrait of a Lomokino in Istanbul…

Olympus Trip and an airliner climbing through an autumn sky

Mariachi menace in New York, captured on an Olympus 35RC

You can see the original article here http://zorkiphoto.co.uk/2014/10/11/cheap-film-cameras-olympus-trip-olympus-35rc-praktica-mtl-lubitel-166-zenit-e/#more-1839

Stephen has been on the site before with some great articles that you can see here https://www.japancamerahunter.com/?s=dowling 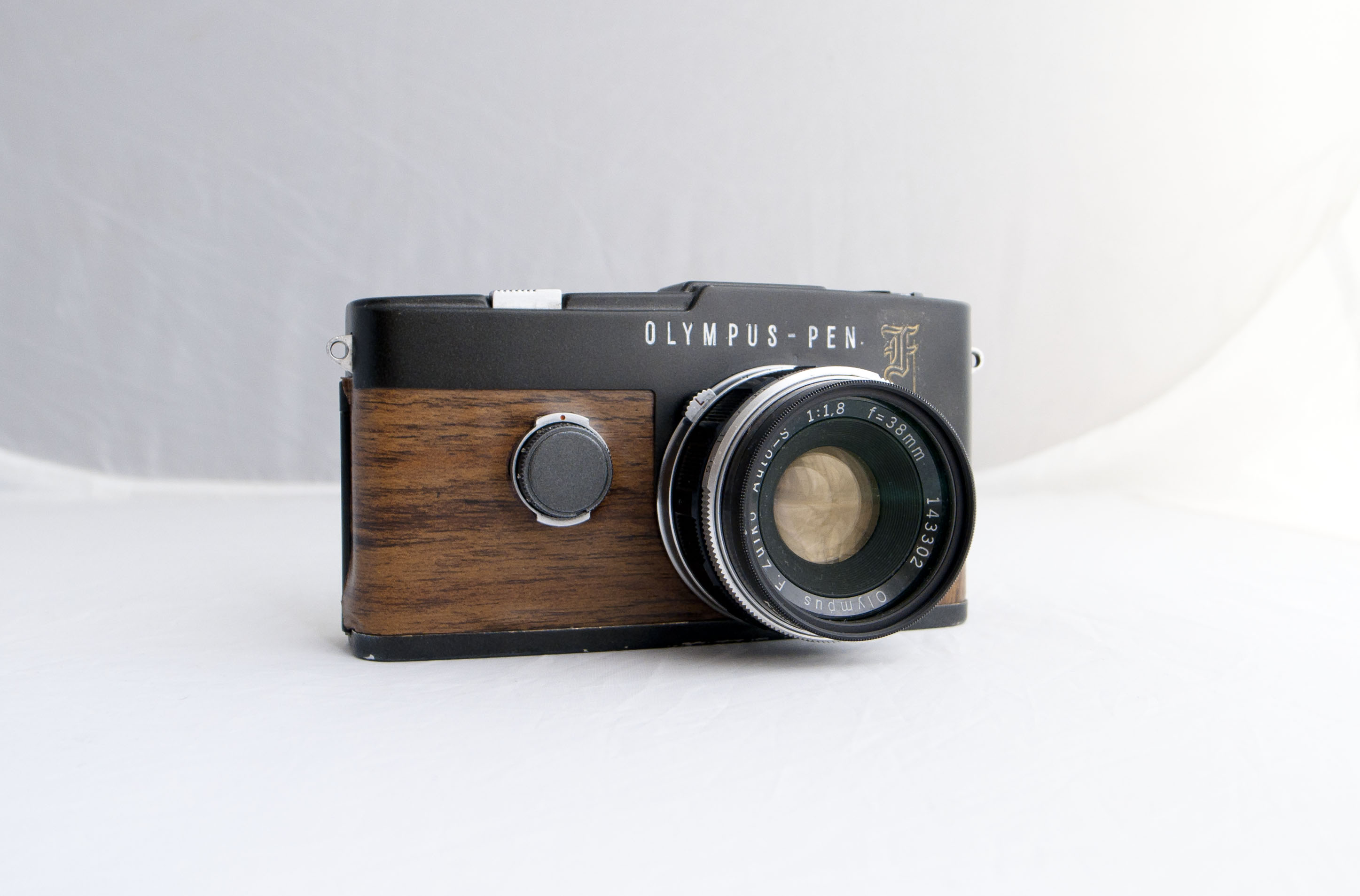 Film for the Digital Photographer – Techniques by Dan K