Jesse’s book review, Out of Necessity
Jesse reviews a bit of a different book this time around. Usually it is Japanese photobooks, but this time we have a collective book to check out. Enjoy.

Collectives can either be a good thing or a bad thing. When it is bad I recall the quote that the only good that can come out of a collective is an average among the participants (believe it was Ayn Rand lol). Nobody can really do his or her potential because you have to average out for a collective. True cohesiveness is tough to come by in which everyone reaches their potential in a way that is to everyone’s best. What I have here is not quite either but it is pretty damn good and I think the JCH audience will enjoy this and if anything hopefully be inspired by it.

I received this in the mail from one of the members and he mailed me that he would with no pretensions of a review. Initially I was skeptical because as of late I get a lot of emails from people asking me to review things that I am not sure I can actually write about. I felt like an ass needless to say from the strings attached position that I took with him even though I am Godfather to our mutual friend’s daughter and he was someone I corresponded with before these reviews when I was just doing obscure Japanese film reviews on my Tumblr for a handful of followers. I received the book and really felt compelled to write about it.
I tend to keep this reviews as laudatory as possible meaning if like something I write about it and if I don’t I don’t spend the time tearing it to pieces. I believe that good taste is made of a thousand distastes (Truffaut) so I tend to not like the majority of stuff I come across. So please don’t get me wrong I do appreciate the e-mails from people willing to send me stuff, just can’t guarantee I can write about it which I think tends to be the point. However it may be, here is Out of Necessity Stockholm.

There are nine photographers here with backgrounds as different as Sweden, France, Spain and Italy though it was made Stockholm and shot there as well. I took this description from the afterward at the end that includes the collective’s thesis that answers the question: Is photography really necessary? It talks about isolation in contemporary city life and as a result all photos are from the street and are in black and white. I will just go in order of the book that has a featured photographer and set idea. I will begin with Koakim Kocjancic and his works White Scapes. This is one of my favorite sets that features all out of focus shots. I have no choice but to call it provoke-esque though like the literary term Kafka-esque used to describe pretty much anything remotely surreal or absurd is a lazy blanket term…. yet that is entirely what it is. Different night road shots with streaking lights are shot along blurry city scenes. The outlier and my favorite photo is of a TV in the bedroom that has an eyeball on it. The mood his set invokes sets the tone. The next photographer is Ola Billmont that in stark contrast to the previous photographer featuring in-focus city shots. I’d say they are split between two styles one a more Gilden-esque flash photography style that catches people off guard and a more fly on the wall observant none flash set. The flash stuff is touchy to me and it is a matter of taste but the opening shot is of an old man with a cane looking pretty perturbed as are a few of the other subjects.
From Flickr I get the notion that this is very idea of what street photography has come to to most and outside of a few most do nothing with the style then what it is…documentations of pissed of people who are just trying to get by. Two shots of people in cars are the two-standout images that combine the best of both styles I felt were attempted. The next photographer Steffan Wallin like Ola offers no title. He has a mix of static scenes with candid people shots. I prefer the style of the earlier than the later as the people shots are merely of people passing that don’t say or do anything really. The static shots of a sink, a chess set, or drippy staircase come off more comfortably. The next photographer is Rayen Rodriguez Aldacor and his set titled Passages. They are 6×6 shots of people among some sort of passageway rather stairs, crosswalk, train, etc. There are two static shots the first of which is a play on lines. A few of the people flatly look perturbed, however my favorite image of the bunch is the last shot of the set. It features an average sized woman waiting to cross the street. On the back of her shirt is half of a fish that leads to the road. A person is captured passing on a bike leaving a space between the fish and that person. In this space there is a person crossing the street and a steeple in the distance that makes for an interesting spontaneous composition. The next photographer is Pierre Vincensini with his series titled Metro. The metro here in Tokyo has been done to death so I was skeptical. He put together a really nice original series that forms one of the more cohesive series in the book. Most shots are unique personal moments, an interracial couple in embrace, a business man retrieving his dropped newspaper, reflection shots, and business men coming and going. The two shots of people head on come off great because we feel a connection with the people who make eye contact with the photographer’s camera that I feel says something about the person unlike the earlier photos that just seemed to piss people off. Not to mention both compositions are sound in each photo the later of which sees four people on various planes of the photo.
The man in the middle makes direct eye contact with us while in a phone call, the one closes to us is cut off by the photos frame and both the man on the extreme right and in the background on the left make for full use of the frame. Hans Malm is the next photographer whose series carries a German title that I can’t understand. However his photos create a strong series with photos that fill the frame and have depth in every shot, as the foregrounds are nearly all obscured by a fence, wires, poles, or glass. He packs so much into each photo that visually they are just a real treat. My favorite photo has a pole obscuring the foreground dividing the photo vertically in half. Then there is a bridge on the upper third that then cuts the frame horizontally creating four quadrants that then has a human figure in different form in each quadrant. There is a person on the bridge and a person clearly visible in a passing truck who are divided by the vertical sign. There is blurred sign of a woman in the bottom left quadrant who is a bit out of focus due to the proximity of the camera and finally a picture of a man in an advertisement on the side of a truck in the opposite lower quadrant. Just an amazing photo really. The next photographer is Jonas Berggren whose series carries the title: I don’t remember your face. This series features people or objects with faces that reveal no detail through various means, a silhouette, snow on a car windshield, out of focus shots, or a shadow. The most revealing shot is of a woman laying down whose face is obscured by the photographer’s camera that happens to be an iPhone as the shadow reveals. The following image is the outlier in the series that I’m not convinced carries the theme of a white fence that is a nice photo but doesn’t seem to gel with the others. Next is Andrea Campesi whose work carries no title that makes sense because I can’t detect a theme. There is portrait, some static shots, people from behind, a bunny, and a photo of a woman drawn on to a wall. Really prefer the static shots that offer both mood and in the last great texture. The final photographer is Rickard Falk who series is titled 99. Like the title the opening photos are ambiguous. The first features a lone child wandering the streets at either dawn or dusk juxtaposed to an open door that offers only a bright light both work together through the editing. Skipping around there is one of the more original merry-go-round shots I have scene that like the first photographer is out of focus creating these strange crosses that offer an offsetting mood. Went a little long with this one. This book is limited to 400 copies and is available at http://cargocollective.com/oon/Out-of-Necessity-Vol-1.
These types of books are good for everyone involved. Think the photographer gets the benefit of having printed material while sharing costs, but more so being exposed to their fellow photographers audience. As a photographer looking on, you get to see the various styles and as a peer, the faults that are more reflective than anything.

Really happy to see this one. This is a great read. 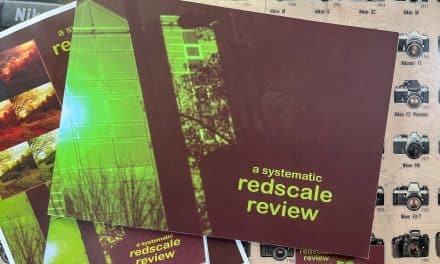