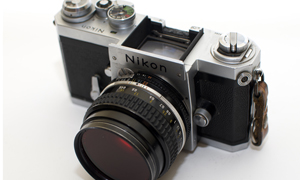 35mm SLR on a starving artists budget
Who says gear has to be expensive? Daniel Sawyer Schaefer gives us a guide on how to get yourself shooting without breaking the bank. Check it out.

Many of us have been there, standing in a camera shop, staring at the shimmering chrome lining the walls, pining for a new kit, but then we remember, we’ve a mighty need to eat this week.
If only there was a way to buy that workhorse you’ve been pining for, and still rock a hot bowl of ramen and a cold pint on the weekend…
Through much trial and error, and some days where it definitely came down to a roll of Portra or a bagel and schmear, I’ve found some easy ways to find the deals we need.

Buy a light meter!- Some people have asked me why they need a meter if one is already built into the camera? Much of the vintage gear you will find, if it has an operating meter you are going to be paying a premium, sometimes as much as $200 more than a camera that aside from a meter is fully operational. Owning your own meter means you can get a reading no matter the setting, I’ve carried and used my meter every day since I bought it two years ago.
Suggested Gear – Sekonic L308s $230 (worth every penny!)
Words of wisdom – Iphone meter apps are cheap, but can also be easily fooled by uneven lighting. 35mm
As an initial note, if you’re looking for a deal, don’t care if the camera looks pretty, like your momma told you in the fourth grade, it’s what’s on the inside that counts.

Bodies – Buy mechanical, not electronic. The two basic types of film camera bodies you come across can be broken up into two categories: Mechanically actuated, and Electronically actuated.
Mechanical means the shutter and aperture run without any electricity whatsoever. Some of these cameras include a battery compartment to run the meter, but even in the absence of a battery, will still fire at all settings. Shooting mechanical, you’ll never have to worry about packing spare batteries, or having to hunt down a shop that sells some obscure watch battery while on location.

Electronic means that the shutter and aperture are managed by a computer chip within the camera. In the absence of a battery, these cameras will not fire. Even more problematic, sometimes a low battery can affect exposure, making the exposure read correctly, but fire off by as much as two or three stops. Sometimes in the absence of a battery, these cameras will seem to fire, but in reality only fire at a single shutter speed, no matter what they are set to (usually 1/60th or 1/125th.) If a camera has any of the ASP modes, it is electronically actuated. These cameras are also significantly more expensive to repair.

Suggested gear- Nikkormat avg$50, Nikon FM/Fm2/F3 avg$175
Words of wisdom- Avoid anything with ASP modes if you want something that lasts.

Lenses, Compatibility is key(or is it?)- When buying lenses, of course look for the obvious, make sure the glass is clear and clean, the focus is smooth, and the mount has no dings or scratches. As long as the glass is clean and the mount is still sturdy, don’t worry what the rest of the lens looks like scratched black paint has character!
A nice solution to finding cheap lenses is go old and I mean OLD. The average Nikon 50mm 1.8 costs under $100. When it comes to Nikon there are three basic types of used lenses you can find: Pre AI, AI, and G
The basics come down to meter compatibility.
Pre AI use the Pin and Fork method of exposure communication. You see this method on the old photomic Nikon Prisms and other older bodies.
AI communicate with the barrel around the lens. You see this on every model from the FM onward, including and of the pro or prosumer digital systems.
G lenses have had the manual aperture ring removed and communicate only via contacts in the mount. These are the least compatible lenses in the Nikon family. They will mount to all Nikon bodies, but if shot on anything aside from digitally actuated bodies like the later F series cameras and the D digital series, they can only shoot at absolute minimum aperture. G stands for Gelded, which comes from a farming term, which means something very unpleasant if you happen to be a young cow.
Suggested Gear- AI manual lenses, find them on sites like KEH for sub $200, they’re sharp, fast, and smooth as butter. Usability comes down to basic day to day use. How does the build quality feel? Is it easy to use? is it a weight around my neck, or does it live in my hand, more of an extension than an accessory? When I grab this camera in the morning, does it make me want to spend the day shooting?

Compatibility is about the cross pollination of your systems, this mainly comes down to lenses.
I’m a Nikon user, but let me be clear, I am not a Nikon fanboy. I use Nikon gear for all of my 35mm needs, film or digital, because all of the F-mount lenses made by Nikon will work with any Nikon F-mount bodies ever made, going back more than 60 years. (There are a few obscure lenses that have small compatibility issues, but are so rare there is little point in addressing them as a worry.)

For those “Canonites” out there, have no fear, almost all vintage Nikon glass can be used on Canon bodies with only a simple $40 metal adaptor you can find at almost any camera store.

Investment can be a bit more complicated. First and foremost you have to consider it’s durability and ease of repair. If you buy a camera for $150, and it breaks, will you have to spend $50 or $250 to get it fixed? Unless you luck out and find a Leica in a goodwill bargain bin, chances are the costs of repair will be too steep to justify unless it’s a camera you really feel is worth the extra pennies.

This is another reason why I always preach Nikon for anyone looking to buy any vintage SLR gear, the cameras inherently tend to be more durable, and with the exception of a few models here and there, the parts are still commonly stocked by most repair clinics, and on occasion even Nikon itself.
Suggested gear- I swear Nikon isn’t paying me to say this, they just make the most solid equipment that’s the cheapest and easiest to repair.

All in all, if you pick up a meter, a nice solid mechanical body, and a worn but clean piece of vintage glass, you’ll be able to have a kit to be proud of, for pennies on the dollar.

Daniel is a New York based photographer and cinematographer. You can see his bag here. And his website here. Below are a selection of his images taken with his budget saving setup. Thanks for sharing this with us Daniel. This is food for thought for those who don’t have money to burn or perhaps don’t want to spend the earth on their first film camera.