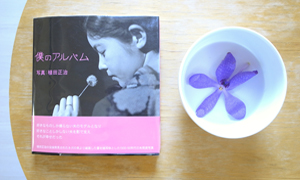 Jesse’s book review – An Album: The Everlasting Story by Shoji Ueda
In his latest review Jesse shares with us a book that I was unfamiliar with. This looks really good and as always Jesse has beautiful pictures and a thoughtful review. Read on.

With the exception of writing on Lee Friedlander or Henri Cartier-Bresson, this will be the most laudatory of reviews. After Cartier-Bresson and before discovering Friedlander, it was Shoji Ueda who left me saying yes to every photograph. Yes the compositions! Yes the lines and form! Yes the symbolism! Yes the nothing-ness!  Yes it’s economical! And yes it’s Japanese! You can see the way this review will be going. This is the one Shoji Ueda (non compilation) photo book that not only could I find but afford.  An Album: The Everlasting Story is a collection of photos shot between 1930-1950, centering for the most part on Ueda’s wife. The marriage was said to be an arranged one, but nevertheless was happy one. She helped Ueda run his photo business and the couple had three children, all of whom appear in his work. From this the personal nature of this book is evident as it is chronologically expressed with each turn of the page. With that said, despite having his photo plastered on the side of Photography Museum here in Tokyo; it always incensed me how most aren’t familiar with his work… So to begin addressing my enthusiastic yes’s from earlier, let’s begin with composition. From the opening photos of the self portraits of Ueda and his wife through mirrors in a room shows his preoccupation with composition. Like the Alexy Brodovitch review from before, much of the amazement here stems from the time that these photos were taken. Though even today these are remarkable, at the time they were pretty Avant-garde combining surrealist compositional elements with a realistic depiction.  This coupled with his attention to line and form make up his most popular series of work set in the Tottori Sand Dunes. The earlier versions, as seen in this book, were composed of family portraits and single shots of his wife. The placing of his family within each frame using the horizon as a solid background line is nothing short of unique. Going into the symbolism please take for instance a photo set in the dunes toward the end of the book. It has within its frame the mother at center with her kimono being pulled in opposite direction by two of their kids. The third is in a arm sling with what one could guess a broken arm at a distance along the horizon of the dune. Spatially its perfect, but symbolically it represents the tension amongst siblings vying for their mother’s attention. The one with the broken arm effectively isn’t involved by default, either do to the fact that he can no longer compete on account of his arm or rather because he doesn’t have to. Either way, the concept and spatial representation are one. The nothingness in relation to the sheer economy of his photos all come off entirely Japanese. In a lot of the dune shots there isn’t a cloud in the sky. It is as if he accepted the nothingness and used it as a shape creating an enclosed tension between the solid line created by the dunes and the frame edges. In a lot of the non-dune photos he is economical in what he allows into his frame lines, always never more than necessary. It creates a surreal effect but at the same time is just economical in the attention to nothingness. This concept of nothingness in Japanese is called mu. It can be seen in other Japanese visual art mediums of the time, most notably in cinema. Pre-war director Hiroshi Shimuzu too is noted for his economical-ness and his attention to composition utilizing negative space just as much as the positive. This is an aesthetic sentiment that would become forgotten in the 1960s in both cinema and photography. In cinema the Japanese new wave of the 60s dismissed almost entirely the aesthetics of those in the Japanese cinematic golden age of the 40s and 50s, while in photography the 60s and 70s would bring the less compositional, much more raw street photography of Tokyo in the early nonrealistic images from Araki to Moriyama’s beginnings. For the time, the elements of mu while remaining economical made Ueda’s work quote subjectively to me on par with a Shimizu or Ozu in their respective mediums. Although it wasn’t too difficult to get here in photo book shops in Japan, overseas I think it would be. Amazon doesn’t seem to stock it and as far as the internet goes the only option seems to be japanexposures.com. Nevertheless Ueda is quite original, and remains one of my favorite and most inspirational photographers. Photography Zines and Books No: 40