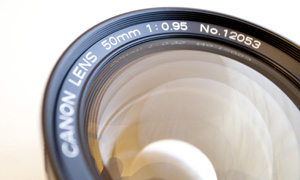 Just sometimes a very special lens comes along
And that lens is the Canon 50mm f/0.95. Despite popular belief, this is not a cine lens. It was originally developed by Canon for the 7 rangefinder system. And at the time it was the fastest prime lens available in the world, beating Leica to the punch…

This lens is often called the ‘dream lens’, in fact it has a flickr group dedicated to it by the same name. It has a reputation for producing a dreamlike effect, with ultra creamy bokeh. It is also an absolutely massive lens, with a 72mm filter diameter and weighing in at 605g. That is a hefty hunk of glass. The lens was designed by Lens master Mukai Jirou, who also designed the Canon 35mm F1.5, 35mm F1.8 and 35mm F2.0 LTM lenses. It is a Gauss type lens, with 7 elements in 5 groups. It has a 10 blade diaphragm with a minimum aperture of f/16. Not good for bright days then.

About 19,000 of these lenses were made during the early 60’s to the early 70’s. Though I would wager that significantly less of them are around now. When this lens was released it was 57,000 yen, a massive amount of money at the time (almost a years salary apparently).
The price for this lens has tripled in the last few years, with the advent of the digital rangefinder, and it is only going to continue climbing. I would consider a lens like this to be an investment (much like the Noctilux f/1.2).
The cine lens of the same specs actually came after the rangefinder lens, and was produced throughout the 70’s. Apparently about 7000 of these were produced. Though again I imagine that there are hardly any of those lens now. You can tell the difference between the two as the cine lens has ‘Cine’ printed on the filter ring. I would love to post some pics taken with this lens, but seeing as I don’t have a digital rangefinder at the moment you will have to wait for them. Though I shall certainly get some at the earliest opportunity.

Make no mistake, this is no comparison to the Noctilux, but at around a third of the price it is certainly not a lens to be passed up. It is reputed to be a great portrait lens in the right hands, but you have to be aware of the extremely shallow depth of field. I will take a bit of getting used to.